As the world’s zombies twiddle their digits on screen and keyboard feeling they are enjoying quality privacy time with their latest dumb game, app or social media account the intelligence (oxymoron) community is, thanks to their full fledged partners in Google, Facebook, WhatsApp, FaceTime and Skype, along with the rest of the mindless connectors online, logging, filing, profiling, face IDing and gathering all evidence that will soon be your known profile and criminal identity to the PTB.

“Done nuffin’ wrong“, you’ll hear the cry go forth, “Why should I worry?” Perhaps it’s best for these types to await that midnight knock at the door and full time detention, torture or extermination before they awaken to their lives and freedoms having been utterly smashed, owned and recorded to use against them at a time convenient to blackmail, arm twisting or just disposal.

For others who have seen the light, are spreading truth where falsehood, lies and BS propaganda run riot, it is full on notice that the State, whatever its colour or leaning is now totally in the hands of the controlling psychos intent on stamping your head, ID, every word of truth, into the ground and pouring their version of Monsanto’s ugly remedies onto what remains.

The power holders and elite self interests have never enjoyed their lying, criminality and controlling to leave the room. Social media, the Internet and modern technology all contributed a shot in the arm for freedom of information as much as a means to lock down truth, divest distractionary narratives, fake news and bottom line create mayhem and fear throughout the world.

Julian Assange, a truth exposer extraordinaire through Wikileaks is presently receiving the full on venom of the agencies of deception, the portrayers of the illusion of choice and freedom. That he may even get to the US for their contrived, violently vicious false charges is in little doubt. The British Government, deceitful and accessories to these criminal mafia, alongside an Australian homeland whoo threw him to the dogs, have locked him up on ludicrous sentencing of bail jumping after over seven years incarcerated in the Ecuadorian embassy. His incarceration having  now helped weaken and poison his body and mind is now compounded through the active poisoning of his senses and body by the State. 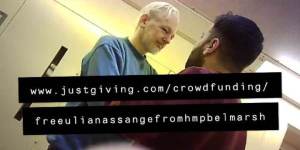 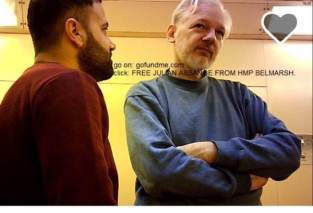 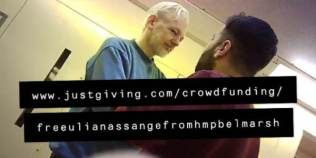 Pictures emerging today, taken by a fellow inmate at Belmarsh High Security prison, of his real condition are frightening. His haggard looks and wasted figure shows the spite and vicious vindictiveness dealt by his cowardly enemies.

Then this week the Australian Federal Police raided the offices of ABC News and News Corp on the trumped up nonsense of uncovering who leaked the criminal actions found to have been perpetrated by Australian soldiers in Afghanistan. That they were in no way interested in the real criminals speaks volumes for what really is going down. The police raided the home of a News Corp journalist Annika Smethurst, vandalising her home and possessions. Their huge powers to delete, export and abuse journalists’ information on news gathering can only be a real frightener, as it was messaged to be, to any other journalists set on veering an inch from the proscribed narrative.

David William McBride, a former British army captain in the Blues and Royals, has said he is prepared for the fight of his life in court, for handing over information he felt to be in the public interest. It contained proof of abuses committed by the Australian Tax authorities and criminal killings committed by members of the Afghan task force.

We can expect the intensity and vicious clamp down on many areas of the System’s abusive use of power in so many areas to only intensify. They are relying on the majority to remain silent. We shall see if the prior connivance by the mainstream is in any way stirred into counter action as members of their own ranks are hauled away and prosecuted.

The war on the freedom of information, the telling and spreading of the truth behind the crimes committed daily by the bastards in control is in full swing. It is undoubtedly the USA alphabet agencies, political manipulators trying out, experimenting, under subversive guidance from Mossad, as to how easily and far they can initiate this lockdown on the public. As always with the help of a complicit press who cry foul only now to hopefully prevent themselves looking complicit in this whole program, is ironic and pathetic at the same time.

More and more people are coming forward as they see the reality those of us who have been wise and awake to what has been going down, have noted our warnings and constantly aired interpretations take form in full public view with no lack of clarity.

Conspiracies have always been there. Most of them perpetrated by the criminals now locking us down. It gives no joy to see it all coming home to roost. A deep sadness for all those who said it will never come about, for their crass ignorance is still felt. However sympathy I personally cannot muster as stupidity at its very least alongside fraternal ignorance needs no hugging and comforting. Those days are long gone.

So if you truly believe still these things to be merely the ravings of truth telling conspirators then you deserve all the excrement  targeted with your name on coming to you at a time and place of their choosing.

Julian Assange pleaded as he was manhandled out of the Ecuador Embassy into custody, “We all must fight this fight, we must now all become Julian Assange!”

Never has a plea for action been more dramatic nor called for at this momentous time in our collective history.

If it is not too late already we must make as if it is not, and fight. The alternative is a doomed dystopian fascist world where thought is a crime, peace is war and we are all criminals without any hope of justice.

Read the manual – 1984 – read the means by which they serve it – Brave New World – read the bloody signs that have been screaming out in plain sight for decades – or be doomed!

2 thoughts on “The Final Acts in the Lockdown on Truth”