Happy people buying online everything under the sun. We may be lacking money, earning a crust, even got a few dollars yet all the time day and night we feed one man’s pockets with our hard earned income. We give it away without, most times, asking a question. Perhaps we do ask – What size? How quickly can I have it?

At Amazon warehouses and stockrooms around the world there are those fulfilling our orders for Mr Bezos and in the process making his company a trillionaire corporation – the auto spell wants me to change it to millionaire – NO TRILLIONAIRE.

Earlier this week, e-commerce giant Amazon briefly became the world’s second trillion-dollar company after Apple, adding $434 billion to its market value. It goes without saying that nobody benefited more than its founder. Jeff Bezos added $67 billion to his net worth in 2018, bringing his total fortune to $167 billion, according to the Bloomberg Billionaires Index.

These poor slaves – yes, that is what they are – are barely bringing in enough to buy the postage on your purchase but lo! Bezos has promised to give them a pay rise – Hurrah!

But wait Amazon‘s minimum-wage increase for its hourly workers comes with a trade-off: no more monthly bonuses and stock awards. Still what do you the buyer care. You want your purchase and you want it now!

Perhaps you are an activist and shouting loudly for fair trade, fair pay and a fair world. Jumping up and down, Facebooking, social media ranting and Twittering, yet that does nothing to advance equality and just pay. Actions are what is needed. Are you refraining from shopping at Amazon? Because if you are not then you are the problem as well. Think about that just one par second…..

Mr Bezos has enough money to feed the whole world. To clear all the people off the streets and get them work. He will not do that he will merely smile complacently with his bald head and smugness and trouser a whopping $11,166,666 per hour.

Two of Amazon’s biggest critics, Sen. Bernie Sanders and the Trump White House, both applauded the move on Tuesday.

The corporation still make trillions, pays piss poor wages and grabs back with the other hand., so like all these philanthropic magicians, they swipe then take away and tell you how lucky you are.

Yet we, the people say so little, do so little. We prefer to satisfy our self absorption into our trinkets for an easy life. We have no right to complain the world’s richest are stashing it all.

If we are not prepared to walk with our feet and pocket our money instead of encouraging these greedy few then we deserve the shafting. These inactions make no changes.

The fact we are the obedient sheep of the corporate cabal is too embarrassing to handle. We prefer to turn away, ignore the reality we could change things overnight if we took an ethical, moral stand against this arrogant greed and carry on with the same old, same old.

Truth is 90% of what we purchase we do not need

It is our greed and vanity that drives our desires. How do you like that, feel better?

We cannot justify our indolence and inaction, just because we convince ourselves we need it.

Until people take action by boycotting big time these rich greed infested players we might as well accept we ourselves are instruments in their hands to be played over and over.

And then let it sink in what Michael Krieger writes:

The sneaky thing about Amazon’s increased dominance in so many key aspects of our lives is that much of the perniciousness is hidden. No one’s going to tell you about all the retailers who have gotten pressured or destroyed via its tactics while you’re happily clicking “add to cart” and smiling about 2-day free shipping. In this sense, it can be best compared to the evils of factory farming. Most people just simply have no idea about the immense damage going on behind the scenes as they indulge in incredible convenience and what looks like a good deal.

Amazon works intimately with the NSA. It works for the CIA and supplies it with the tools for its covert criminal operations.

Amazon Web Services (AWS) has a major financial relationship with the CIA.

A 2017 article in Business Insider summarized some of what’s going on: 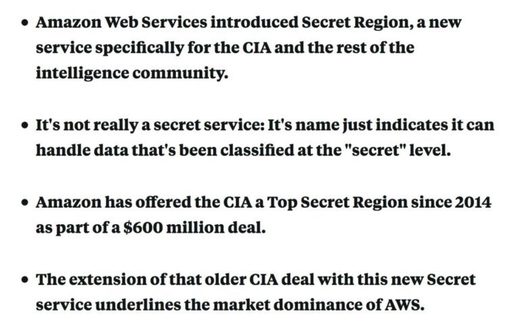 Stacy Mitchell noted in her excellent article, Amazon Doesn’t Just Want to Dominate the Market-It Wants to Become the Market:

By the fall of 2016, the share of online shoppers bypassing search engines and heading straight to Amazon had grown to 55 percent.

If ever we needed to take action and take Amazon down  multitude pegs it is today, now, this moment.

Otherwise we merely doom ourselves through complacency and inaction to be eternal slaves to our own consumerism.